Eggs are laid by females of many different species, including birds, reptiles, amphibians, and fish, and have been eaten by mankind for thousands of years. Bird and reptile eggs consist of a protective eggshell, albumen (egg white), and vitellus (Egg Yolk), contained within various thin membranes. Popular choices for egg consumption are chicken, duck, quail, roe, and caviar, but the egg most often consumed by humans is the chicken egg, by a wide margin.

Egg yolks and whole eggs store significant amounts of protein and choline, and are widely used in cookery. Due to their protein content, the United States Department of Agriculture (USDA) categorizes eggs as Meats within the Food Guide Pyramid. Despite the nutritional value of eggs, there are some potential health issues arising from egg quality, storage, and individual allergies.

Chickens and other egg-laying creatures are widely kept throughout the world, and mass production of chicken eggs is a global industry. In 2009, an estimated 62.1 million metric tons of eggs were produced worldwide from a total laying flock of approximately 6.4 billion hens. There are issues of regional variation in demand and expectation, as well as current debates concerning methods of mass production, with the European Union's ban on battery farming of chickens.

Egg white coagulates, or solidifies, when it reaches temperatures between 62.2 and 65°C. Egg yolk coagulates at slightly higher temperatures, between 65 and 70°C.

If a boiled egg is overcooked, a greenish ring sometimes appears around egg yolk due to the iron and sulfur compounds in the egg. It can also occur with an abundance of iron in the cooking water. The green ring does not affect the egg's taste; overcooking, however, harms the quality of the protein. Chilling the egg for a few minutes in cold water until it is completely cooled may prevent the greenish ring from forming on the surface of the yolk.

Cooking also increases the risk of atherosclerosis due to increased oxidization of the cholesterol contained in the egg yolk. 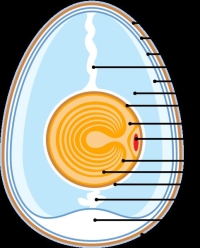 The shape of an egg resembles a prolate spheroid with one end larger than the other, with cylindrical symmetry along the long axis.

An egg is surrounded by a thin, hard shell. Inside, the egg yolk is suspended in the egg white by one or two spiral bands of tissue called the chalazae.

Air cell
The larger end of the egg contains the air cell that forms when the contents of the egg cool down and contract after it is laid. Chicken eggs are graded according to the size of this air cell, measured during candling(*). A very fresh egg has a small air cell and receives a grade of AA. As the size of the air cell increases, and the quality of the egg decreases, the grade moves from AA to A to B. This provides a way of testing the age of an egg: as the air cell increases in size, the egg becomes less dense and the larger end of the egg will rise to increasingly shallower depths when the egg is placed in a bowl of water. A very old egg will actually float in the water and should not be eaten.

(*) Candling is a method used in embryology to study the growth and development of an embryo inside an egg. The method uses a bright light source behind the egg to show details through the shell, and is so called because the original sources of light used were candles.
The technique of using light to examine eggs is used in the egg industry to assess the quality of edible eggs

Shell
Egg shell colour is caused by pigment deposition during egg formation in the oviduct and can vary according to species and breed, from the more common white or brown to pink or speckled blue-green. In general, chicken breeds with white ear lobes lay white eggs, whereas chickens with red ear lobes lay brown eggs. Although there is no significant link between shell colour and nutritional value, there is often a cultural preference for one colour over another.

White
White is the common name for the clear liquid (also called the albumen or the glair/glaire) contained within an egg. In chickens it is formed from the layers of secretions of the anterior section of the hen's oviduct during the passage of the egg.[33] It forms around either fertilized or unfertilized yolks. The primary natural purpose of egg white is to protect the yolk and provide additional nutrition for the growth of the embryo.

Egg white consists primarily of about 90% water into which is dissolved 10% proteins (including albumins, mucoproteins, and globulins). Unlike the yolk, which is high in lipids (fats), egg white contains almost no fat, and the carbohydrate content is less than 1%. Egg white has many uses in food, and many others, including the preparation of vaccines such as those for influenza.

Yolk
The yolk in a newly laid egg is round and firm. As the yolk ages, it absorbs water from the albumen, which increases its size and causes it to stretch and weaken the vitelline membrane (the clear casing enclosing the yolk). The resulting effect is a flattened and enlarged yolk shape.

Yolk colour is dependent on the diet of the hen; if the diet contains yellow/orange plant pigments known as xanthophylls, then they are deposited in the yolk, colouring it. Lutein is the most abundant pigment in egg yolk. A colourless diet can produce an almost colourless yolk. Yolk colour is, for example, enhanced if the diet includes products such as yellow corn and marigold petals. In the US, the use of artificial colour additives is forbidden.

Egg yolk oil or egg oil is used for cosmetics and dermatology.

Grading by quality and size
The US Department of Agriculture grades eggs by the interior quality of the egg and the appearance and condition of the egg shell. Eggs of any quality grade may differ in weight (size).

In Australia and the European Union, eggs are graded by the hen farming method, free range, battery caged, etc.

Chicken eggs are also graded by size for the purpose of sales.

Farming issues
Most commercially farmed chicken eggs intended for human consumption are unfertilized, since the laying hens are kept without roosters. Fertile eggs can be eaten, with little nutritional difference to the unfertilized. Fertile eggs will not contain a developed embryo, as refrigeration temperatures inhibit cellular growth for an extended time. Sometimes an embryo is allowed to develop but eaten before hatching as with balut(**).

(**) A balut is a fertilized embryo that is boiled and eaten in the shell.

Eggs in the shell are usually packed in crates or cases.

Chilled Eggs are those which have been in cold store for more than four months. Temperatures should be between 0°C and 5°C. The temporary opening of cases of chilled eggs, if not carried out in a refrigerated compartment, will cause mould growth on the shells, due to condensation. This may develop very quickly. At 0°C the P.S.L. (Potential Storage Life) of eggs is approx. 6 months; at 5°C a period of 2 months (these examples should only be regarded as a very rough guideline). Eggs are normally tempered before they are removed from chill storage. Means that the temperature is raised sufficiently so as to avoid condensation of water on the shell.

Fresh Eggs are easily affected by inadequate temperatures, storage, humidity, etc. Moisture or humidity may cause mould to develop and produces black spots on the shells. These spots may be traced back to rainy and damp weather during gathering of the eggs or storage in the packing centre prior to export. Eggs are liable to tainting if stowed in the vicinity of odorous goods. Storage temperatures should not exceed 15°C. Egg shells are subject to bacterial contamination, and if the protective membrane is soiled or removed by rough handling, bacterial penetration to the yolk may result, especially under damp conditions. The washing of eggs accelerates the bacterial penetration. Eggs damaged by mould or other reasons may be utilised for animal feed.

Frozen Eggs are packed in hard frozen form in tins which are then placed in a carton or polythene bag. It is essential that this product is from the time of initial freezing until the time of use held in refrigeration so as to avoid any damage caused through defrosting, which may result in spoilage. Damage could also be caused by rough handling, i.e. cartons’ outer packing split, cans becoming creased and the tins exposed to bacteriological forms.

Boiled eggs are eggs (typically chicken eggs) cooked by immersion in boiling water with their shells unbroken. (Eggs cooked in water without their shells are known as poached eggs, while eggs cooked below the boiling temperature, either with or without the shell, are known as coddled eggs.) Hard-boiled eggs are either boiled long enough for the egg white and then the egg yolk to solidify, or they are left in hot water to cool down, which will gradually solidify them, while a soft-boiled egg yolk, and sometimes even the white, remains at least partially liquid.