A seed is a small embryonic plant enclosed in a covering called the seed coat, usually with some stored food. It is the product of the ripened ovule of gymnosperm and angiosperm plants which occurs after fertilization and some growth within the mother plant. The formation of the seed completes the process of reproduction in seed plants (started with the development of flowers and pollination), with the embryo developed from the zygote and the seed coat from the integuments of the ovule. All seeds are different size, shape and colour.

Seeds have been an important development in the reproduction and spread of flowering plants, relative to more primitive plants such as mosses, ferns and liverworts, which do not have seeds and use other means to propagate themselves. This can be seen by the success of seed plants (both gymnosperms and angiosperms) in dominating biological niches on land, from forests to grasslands both in hot and cold climates.

The term "seed" also has a general meaning that antedates the above—anything that can be sown, e.g. "seed" potatoes, "seeds" of corn or sunflower "seeds". In the case of sunflower and corn "seeds", what is sown is the seed enclosed in a shell or husk, whereas the potato is a tuber.

A typical seed includes three basic parts: (1) an embryo, (2) a supply of nutrients for the embryo, and (3) a seed coat. 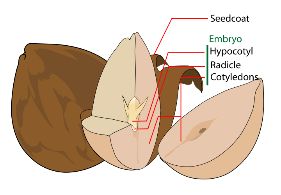 Within the seed, there usually is a store of nutrients for the seedling that will grow from the embryo. The form of the stored nutrition varies depending on the kind of plant. In angiosperms, the stored food begins as a tissue called the endosperm, which is derived from the parent plant via double fertilization. The usually triploid endosperm is rich in oil or starch, and protein. In gymnosperms, such as conifers, the food storage tissue (also called endosperm) is part of the female gametophyte, a haploid tissue. In some species, the embryo is embedded in the endosperm or female gametophyte, which the seedling will use upon germination. In others, the endosperm is absorbed by the embryo as the latter grows within the developing seed, and the cotyledons of the embryo become filled with this stored food. At maturity, seeds of these species have no endosperm and are termed exalbuminous seeds. Some exalbuminous seeds are bean, pea, oak, walnut, squash, sunflower, and radish. Seeds with an endosperm at maturity are termed albuminous seeds. Most monocots (e.g. grasses and palms) and many dicots (e.g. Brazil nut and castor bean) have albuminous seeds. All gymnosperm seeds are albuminous.

The seed coat (the testa) develops from the tissue, the integument, originally surrounding the ovule. The seed coat in the mature seed can be a paper-thin layer (e.g. peanut) or something more substantial (e.g. thick and hard in honey locust and coconut). The seed coat helps protect the embryo from mechanical injury and from drying out.

In addition to the three basic seed parts, some seeds have an appendage on the seed coat such an aril (as in yew and nutmeg) or an elaiosome (as in Corydalis) or hairs (as in cotton). A scar also may remain on the seed coat, called the hilum, where the seed was attached to the ovary wall by the funiculus.

Many structures commonly referred to as "seeds" are actually dry fruits. Sunflower seeds are sold commercially while still enclosed within the hard wall of the fruit, which must be split open to reach the seed. Different groups of plants have other modifications, the so-called stone fruits (such as the peach) have a hardened fruit layer (the endocarp) fused to and surrounding the actual seed. Nuts are the one-seeded, hard-shelled fruit of some plants with an indehiscent seed, such as an acorn or hazelnut.

Many seeds are edible and the majority of human calories comes from seeds, especially from cereals, legumes and nuts. Seeds also provide most cooking oils, many beverages and spices and some important food additives. In different seeds the seed embryo or the endosperm dominates and provides most of the nutrients. The storage proteins of the embryo and endosperm differ in their amino acid content and physical properties. For example the gluten of wheat, important in providing the elastic property to bread dough is strictly an endosperm protein.

Seeds are used to propagate many crops such as cereals, legumes, forest trees, turfgrasses and pasture grasses. Particularly in developing countries, a major constraint faced is the inadequacy of the marketing channels to get the seed to poor farmers. Thus the use of farmer-retained seed remains quite common.

Seeds are also eaten by animals, and are fed to livestock. Many seeds are used as birdseed.

While some seeds are edible, others are harmful, poisonous or deadly. Plants and seeds often contain chemical compounds to discourage herbivores and seed predators. In some cases, these compounds simply taste bad (such as in mustard), but other compounds are toxic or break down into toxic compounds within the digestive system. Children, being smaller than adults, are more susceptible to poisoning by plants and seeds.

A deadly poison, ricin, comes from seeds of the castor bean. Reported lethal doses are anywhere from two to eight seeds, though only a few deaths have been reported when castor beans have been ingested by animals.

The seeds of many legumes, including the common bean (Phaseolus vulgaris), contain proteins called lectins which can cause gastric distress if the beans are eaten without cooking. The common bean and many others, including the soybean, also contain trypsin inhibitors which interfere with the action of the digestive enzyme trypsin. Normal cooking processes degrade lectins and trypsin inhibitors to harmless forms.

Many important nonfood oils are extracted from seeds. Linseed oil is used in paints. Oil from jojoba and crambe are similar to whale oil.

Seeds are the source of some medicines including castor oil, tea tree oil and the discredited cancer drug, Laetrile.

Many seeds have been used as beads in necklaces and rosaries including Job's tears, Chinaberry, rosary pea, and castor bean. However, the latter three are also poisonous.

Other seed uses include:

Usually shipped in bags or bulk. The main causes of damage to seeds are contact with water, heating, fermentation and sprouting, spontaneous heating, and infestation. Seeds are liable to absorb moisture from the atmosphere and in consequence develop mould.

Seeds which have become damp, wet or heated should be immediately dried. Exposure to the sun may kill the life of some seeds. The sound seeds should be separated from the damaged if this is an economic proposition. Damaged seeds should be disposed of as soon as is possible. Seeds are liable to heat and deteriorate if not properly dried before shipment. Deterioration may also set in if seeds are kept for any length of time in conditions of excessive heat.

Loss in weight may be due to loss of moisture content, heating, infestation or seepage. Seeds from some countries may contain a percentage of fine dust or sand which can be partly lost in transit.

Infestation may be caused by insects inherent in the seeds before shipment. See also individual commodity headings and Oil Seeds.