Petroleum or Crude Oil is a naturally occurring flammable liquid consisting of a complex mixture of hydrocarbons of various molecular weights and other liquid organic compounds, that are found in geologic formations beneath the Earth's surface. A fossil fuel, it is formed when large quantities of dead organisms, usually zooplankton and algae, are buried underneath sedimentary rock and undergo intense heat and pressure.

Petroleum is recovered mostly through oil drilling. This comes after the studies of structural geology (at the reservoir scale), sedimentary basin analysis, reservoir characterization (mainly in terms of porosity and permeable structures). It is refined and separated, most easily by boiling point, into a large number of consumer products, from petrol (or gasoline) and kerosene to asphalt and chemical reagents used to make plastics and pharmaceuticals. Petroleum is used in manufacturing a wide variety of materials, and it is estimated that the world consumes about 88 million barrels each day.

The use of fossil fuels such as petroleum can have a negative impact on Earth's biosphere, releasing pollutants and greenhouse gases into the air and damaging ecosystems through events such as oil spills. Concern over the depletion of the earth's finite reserves of oil, and the effect this would have on a society dependent on it, is a field known as peak oil.

In its strictest sense, petroleum includes only crude oil, but in common usage it includes all liquid, gaseous, and solid hydrocarbons. Under surface pressure and temperature conditions, lighter hydrocarbons methane, ethane, propane and butane occur as gases, while pentane and heavier ones are in the form of liquids or solids. However, in an underground oil reservoir the proportions of gas, liquid, and solid depend on subsurface conditions and on the phase diagram of the petroleum mixture.

An oil well produces predominantly crude oil, with some natural gas dissolved in it. Because the pressure is lower at the surface than underground, some of the gas will come out of solution and be recovered (or burned) as associated gas or solution gas. A gas well produces predominantly natural gas. However, because the underground temperature and pressure are higher than at the surface, the gas may contain heavier hydrocarbons such as pentane, hexane, and heptane in the gaseous state. At surface conditions these will condense out of the gas to form natural gas condensate, often shortened to condensate. Condensate resembles petrol in appearance and is similar in composition to some volatile light crude oils.

The proportion of light hydrocarbons in the petroleum mixture varies greatly among different oil fields, ranging from as much as 97% by weight in the lighter oils to as little as 50% in the heavier oils and bitumens.

The hydrocarbons in crude oil are mostly alkanes, cycloalkanes and various aromatic hydrocarbons while the other organic compounds contain nitrogen, oxygen and sulfur, and trace amounts of metals such as iron, nickel, copper and vanadium. The exact molecular composition varies widely from formation to formation but the proportion of chemical elements vary over fairly narrow limits as follows:

Crude oil varies greatly in appearance depending on its composition. It is usually black or dark brown (although it may be yellowish, reddish, or even greenish). In the reservoir it is usually found in association with natural gas, which being lighter forms a gas cap over the petroleum, and saline water which, being heavier than most forms of crude oil, generally sinks beneath it. Crude oil may also be found in semi-solid form mixed with sand and water, as in the Athabasca oil sands in Canada, where it is usually referred to as crude bitumen. In Canada, bitumen is considered a sticky, black, tar-like form of crude oil which is so thick and heavy that it must be heated or diluted before it will flow. Venezuela also has large amounts of oil in the Orinoco oil sands, although the hydrocarbons trapped in them are more fluid than in Canada and are usually called extra heavy oil. These oil sands resources are called unconventional oil to distinguish them from oil which can be extracted using traditional oil well methods. Between them, Canada and Venezuela contain an estimated 3.6 trillion barrels (570×109 m3) of bitumen and extra-heavy oil, about twice the volume of the world's reserves of conventional oil.

Petroleum is used mostly, by volume, for producing fuel oil and petrol, both important "primary energy" sources. 84% by volume of the hydrocarbons present in petroleum is converted into energy-rich fuels (petroleum-based fuels), including petrol, diesel, jet, heating, and other fuel oils, and liquefied petroleum gas. The lighter grades of crude oil produce the best yields of these products, but as the world's reserves of light and medium oil are depleted, oil refineries are increasingly having to process heavy oil and bitumen, and use more complex and expensive methods to produce the products required. Because heavier crude oils have too much carbon and not enough hydrogen, these processes generally involve removing carbon from or adding hydrogen to the molecules, and using fluid catalytic cracking to convert the longer, more complex molecules in the oil to the shorter, simpler ones in the fuels.

Due to its high energy density, easy transportability and relative abundance, oil has become the world's most important source of energy since the mid-1950's. Petroleum is also the raw material for many chemical products, including pharmaceuticals, solvents, fertilizers, pesticides, and plastics; the 16% not used for energy production is converted into these other materials. Petroleum is found in porous rock formations in the upper strata of some areas of the Earth's crust. There is also petroleum in oil sands (tar sands). Known oil reserves are typically estimated at around 190 km3 (1.2 trillion (short scale) barrels) without oil sands, or 595 km3 (3.74 trillion barrels) with oil sands. Consumption is currently around 84 million barrels (13.4×106 m3) per day, or 4.9 km3 per year. Which in turn yields a remaining oil supply of only about 120 years, if current demand remain static. 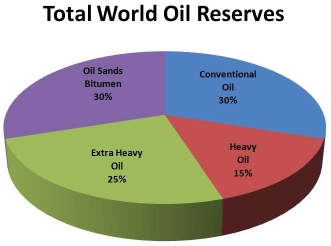 At present half of the world’s proven resources are in the Middle East and North Africa, the other half being divided among the U.S. (including Alaska), Canada, Venezuela, USSR, the North Sea area, Indonesia, Mexico, Rumania and Australia.

According to the composition of the crude oil and depending on the demands of the market, refineries can produce different shares of petroleum products. The largest share of oil products is used as "energy carriers", i.e. various grades of fuel oil and gasoline. These fuels include or can be blended to give gasoline, jet fuel, diesel fuel, heating oil, and heavier fuel oils. Heavier (less volatile) fractions can also be used to produce asphalt, tar, Paraffin Wax, lubricating and other heavy oils. Refineries also produce other chemicals, some of which are used in chemical processes to produce plastics and other useful materials. Since petroleum often contains a few percent sulfur-containing molecules, elemental sulfur is also often produced as a petroleum product. Carbon, in the form of petroleum coke, and hydrogen may also be produced as petroleum products. The hydrogen produced is often used as an intermediate product for other oil refinery processes such as hydrocracking and hydrodesulfurization.

Specialty end products
A breakdown of the products made from a typical barrel of US oil.

Contamination may occur by way of the remains of a previous cargo or by tank cleaning substances, as a result of improperly cleaned tank and/or pipelines.

Damage may also occur through chemical changes in the product itself, brought about by contact with coatings on tank walls and pipelines, or by contamination by moisture or sea water.

Liable to loss in volume as a result of incomplete emptying of tanks and pipelines. The amount of loss will depend on the properties of the product, the dimensions and design of the cargo tanks, and the efficiency of the ship’s discharge system. Characteristics of the product which influence its retention on board are its adhesive properties and viscosity, and the presence of non-homogeneous components in the cargo such as wax, sediment and water.

Retention will also be related to the composition of the tank wall and the temperature at the time of discharge. To assess the risks associated with the transport of bulk liquids a great deal of information is required on the product itself and the mode of transport to be used. In order to avoid loss the shipper should provide an exact definition of the product to be carried in order that the correct pre-shipment measures may be carried out. All loading and unloading procedures should involve the monitoring of selected, critical, quality parameters of the product throughout the operation.

Description of the methods used in measuring temperatures and taking samples should be provided, and made available for consideration in any assessment of cause of damage.

To minimise the damage, sound oil must be kept apart from that which is contaminated. In most cases, only certain ship’s tanks are affected by any contamination. When there is water in the cargo, this is generally at the bottom of the tank. If possible, damaged cargo should be pumped to separate shore tanks where it can be treated, or prevented from contaminating the remainder of the cargo. A frequent cause of incorrect claims is an attempt to sample mixtures of oils and free water. This is a very difficult procedure and the best method is to draw off all free water before attempting to sample, otherwise a false result is almost bound to follow, which may bring claims out of all proportion to the true loss. At most discharge ports suitable arrangements can be made by allocating small land tanks or even tank barges for the damaged position.